Well I do! Lots of it. This whole endeavor started when my sister told me a large Norway Maple tree in their front yard was struck by lightning. They had it looked at by an arborist who said it had to be taken down. Yay for me! The tree was huge. It took some convincing but I eventually got my brother in law to agree to let me have the first log of the tree. He seems to have remembered a few other logs that sat in my mom's backyard for a few years. So the tree came down. It is hard to tell how big it is in the first picture without something for scale. Normally I take logs to Gene Hamilton, a custom sawyer in Doylestown, PA. However his Woodmizer is not big enough to handle this tree. It measured roughly 42" at its largest diameter! After some searching, I found an article in Fine Woodworking which led me to Hudock's Hardwoods with a 55" capacity. 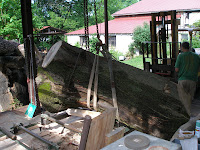 Eventually a flat bed tow truck came to haul this behemoth off to the mill. When Dan Hudock received it he told me it was quite a whopper. I sent Dan a drawing of my cut list which I planned out thinking that I wanted two 3" slabs from the widest center of the tree for live edge table tops. One 5" slab for a Roubo workbench top, enough 6" x 6" material for four workbench legs and the rest cut into 2" slabs for whatever else I could think of. 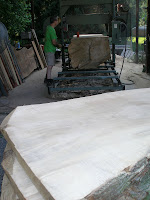 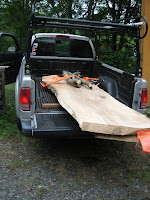 I had scheduled to go up to PA on Memorial day weekend to pick up the lumber, however it wasn't all cut yet. This actually turned out to be a good thing. Dan estimated the log's weight at 7,000 lbs.! When we put four 2" thick slabs into my Dodge Dakota, the suspension bottomed out. It could only handle two slabs. That's when I realized, I'm gonna need a bigger truck! I also realized that a 2" slab is plenty of material for a table top. What was I thinking? Reality started to settle in on how ridiculously heavy these things were going to be.

First thing I did was find out how much weight a U-haul truck can carry. Their 14' truck had just enough weight capacity without being ridiculously huge, so I set up a reservation. I also picked up a 2 ton chain hoist from Harbor Freight as well as a one ton lifting strap. 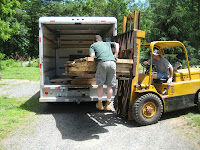 So on the second trip to Hudock's we loaded up the rest of the wood. Dan is quite the maestro with the fork lift. He picked up the stacks closer to one side just past the center of gravity so he could slide them into the back of the truck. This required me to jump on one end as ballast the stack didn't tip. Then we supported the stack with a post while he re-positioned the forklift to push the stack the rest of the way inside the truck. 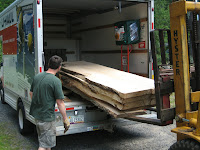 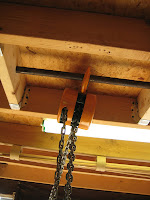 Great, now all I had to worry about was how me and my friend Matt were going to unload this without a forklift. A quick pit stop on the way home at Ace hardware and I got a few joist hangers and some huge Timberlock screws. When we got to my mom's garage (my former shop) we installed a 1" steel pipe in the ceiling with some additional 2x6 blocking and the joist hangars. I ran a Timberlock through the joists into the end grain of the blocking for good measure. I think the weakest link to our whole setup was actually how much weight the loft in the garage could handle. I had rebuilt this several years ago but the joists are only 2x6's. Oh, and their is probably several thousand pounds of wood already stored up there! This is what we hung the chain hoist on, directly above the lumber stack. 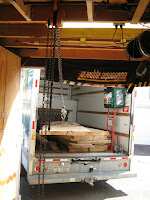 Finally the moment of truth. We backed up the truck as far as we could get it to the garage. Low and behold the chain hoist wasn't even long enough to reach inside the truck. Luckily I had also brought up my 4 ton come-along (or cable winch puller). This enabled us to reach the lifting strap and slowly slide the wood off the truck. It was more of a controlled fall actually. With only a few minor mishaps, but no serious injuries we were able to unload in less than 2 hours. I was actually impressed that we were able to do it at all. 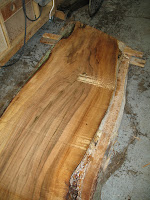 Oh, and the wood? It is some really beautiful stuff. Check out the grain. Some of it has some really cool spalting as well. So, if anyone out there is actually reading this, and would like to purchase a slab or two, feel free to contact me. I think I have enough wood to last me a while. I also highly recommend Hudock's Hardwoods. Check this album out for some more photos of the adventure.
Posted by Kent at 12:21 AM
Labels: Lumber

Most popular and famous features for forklift trucks including cushion tires, electric riders, pneumatic tires, narrow aisle, tow tractor, electric pallet, walkie stackers, and pallet jacks. Each model of forklift trucks is unique to meet a specific business need, whether it is for warehouse, factory, or construction use.


Having read this I thought it was very informative. I appreciate you finding the time and energy to put this content together. I once again find myself personally spending way too much time both reading and posting comments. But so what, it was still worthwhile! paypal login my account