Well, yeah I know its been a while... again. What can I say I'm a busy guy. The screen door seems to have lost its high priority since the temperature started to drop. It's all together except for a final coat of paint and the screen. 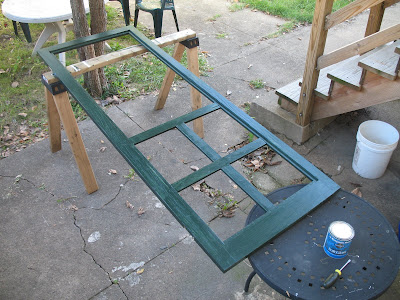 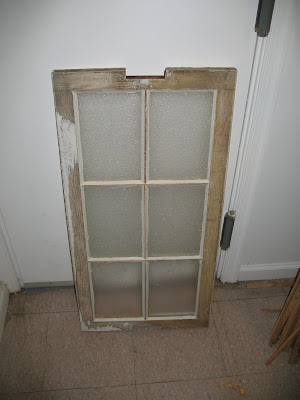 I started working on getting my "shop" organized in anticipation of doing some real work on the kayak. I was inspired by the many photos which have Chris Schwarz's tool racks at the offices of Popular Woodworking in the background that I bought a back issue of Woodworking Magazine which described how they were built. They are extremely simple and I can't believe I had to buy the magazine to figure it out. The rack is essentially two strips of wood that sandwich 1/2" spacers. So I found some scraps of wood in the shed and built what you see in the background below the window. 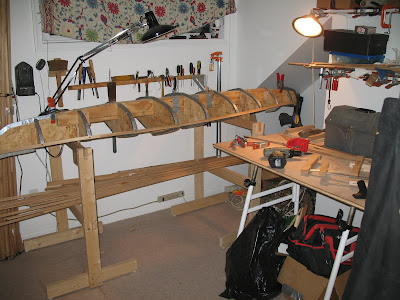 So then I started working on the Kayak again. This time my cedar strips are the right width and should conform to the tight curves of the forms much better than my last attempt. However due to the process of re-milling them they now have paper thin edges at the cove side and these flake off and have become a general nuisance. I'm hoping this won't cause any problems and any gaps should be slight enough so that they get planed out when I fair the hull. This time around I've also decided to screw the sheer strips in since last time I had such a hard time keeping them tight against the forms with only staples and nails. I realized that I should have put washers on the screws to keep them from digging into the soft cedar. Mistakes are always a design opportunity so I think what I'm going to do is inlay small diamonds of a contrasting wood, say maple, at every screw hole. Since the holes go into the forms which are spaced at even intervals along the length of the kayak, I think it will look really nice, and maybe even like I did it intentionally.
Posted by Kent at 10:22 PM 1 comment:
Newer Posts Older Posts Home
Subscribe to: Posts (Atom)