Pardon my french. The Roubo bench craze snags another victim. Less than a month before Christmas my sister tells me that my 3 year old nephew really wants a "tool bench". I can't be happier hearing this fact and decided I'd build him his first workbench.

Of course I have plans to build a proper Roubo for myself in the future, but for now I thought a miniature version of  a true to form Roubo would be good practice. I must point out that I am indeed crazy for thinking that I'd have enough time to get it done before Christmas.

I scaled down Chris Shwarz's Old School Roubo design so that the workbench width is 13", just narrow enough to fit through my planer. The proportions aren't perfect since I am going to make it 24" tall and 36" long, but it will be hard to miss this bench as being French.

A quick run to the Orange Menace and I've got 10' 2x4's that call themselves premium. I won't have the luxury to allow the wood to acclimate to my shop before milling. I simply don't have the time, so any twisting and warping will have to be dealt with on the finished piece.

I view common dimensional lumber as the modern day version of what used to be referred to as deal. It's not the greatest lumber, but it's plentiful, cheap and does the job. This is after all a child's workbench.

I chose 2x4's because they were the cheapest and I could glue up the top by turning them on edge, and make the legs with only two boards. 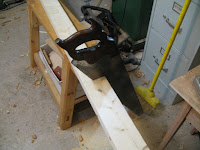 I started by breaking them down on my saw bench. I could have used my circular saw, but I took this as an opportunity to practice  my panel saw skills, and honestly I don't think a circular saw is any faster. It was also a treat to use my grandfather Asher's saw on my nephew Asher's workbench.

I ran them over the jointer and planer to take out some twist and square up the rounded edges. I glued up the legs while working on some other Christmas gifts. 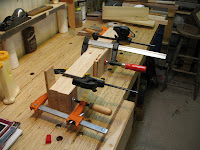 The legs are too big to square up their ends on my shooting board. I scribe a square line using my marking knife all the way around the leg and trim it flat with my low angle block plane. I keep an old contact solution squirt bottle full of denatured alcohol close by for planing end grain. Once I learned this trick I rarely plane end grain without giving it a liberal dousing first.

I then measure the legs 1/8" over long since I know I can just plane the excess flush with the top of the bench when it's done. I crosscut these on the band saw since it doesn't have to be accurate. 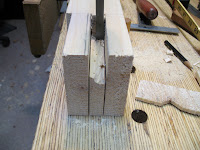 I lay out the tenon and sliding dovetail on the legs. I cut the tenons on the band saw as well. I then bash out the waste between the tenon and the dovetail with a big mortise chisel.  You can see how I really do tend to choose whatever tool does the job the fastest while balancing which technique achieves the desired accuracy. 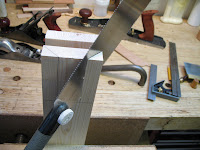 I cut the dovetails on the legs using my inexpensive ryoba saw. It works well since I can make the full cut in one pass since it doesn't have a brass back like a backsaw would. I aim for staying on the waste side of the line so I can clean up these slanting edges later by paring them with a chisel. Here is the result before final fitting 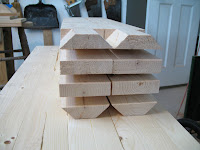 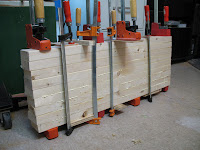 When I glued the top up I didn't worry too much about the rounded edges of the lumber here. I just made sure they were flat on their gluing faces by running them over the jointer and through one pass on the planer. Afterwards I manhandled this panel into my planer, it fit by about a 1/4" of an inch. I planed out all the rough areas till the top was nice and smooth.  Here is the before and after of the rough block vs. the planed surface. 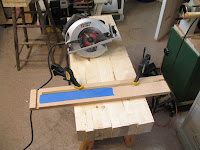 This is where I pulled out the circular saw to hog through most of the crosscutting of the top. However the top was too thick for the saw to cut in one pass, I finished it up with my ryoba.  More to follow...

In the spirit of posting more content, I'm going to  intersperse my longer more thought out posts with quick entries on what I'm doing at the moment "in the shop".

I've built two of these before. It is a Greene and Greene style picture frame. The joints are small mortise and tenons. All it needs is the rabbet, and all the shaping to be done. 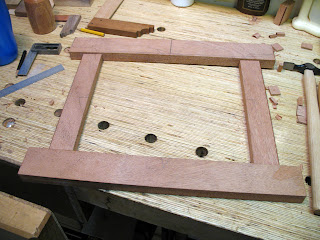 I have a bunch of scraps that are good for making try squares. Here is a small one almost completed. 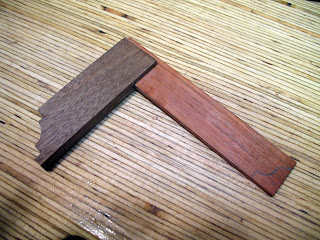 At the urging of some friends I'm back at the blog. When I saw the date of my last post I can't say I was surprised. It really does take a lot of discipline to keep up with something like this. I'm going to try to post here at least once a week. We shall see how that goes...

I've been questioning the Name of my blog for some time now. I can't say I'm necessarily shopless. Even though my space is small, I've found it more than adequate and sometimes fun to overcome the challenges a small shop presents. So I'm going to keep the name as is, and from time to time focus on the issues those of us wishing to work wood while living in a rental apartment, in a city have to deal with.

When I started setting up my shop here in DC, out of necessity I had started to delve more into the hand tool only route of woodworking. As I've been able to find more ways of making use of my space I've added some of my power tools from my previous shop back into my woodworking.

I worried that I was copping out on the idea of using only hand tools. Then I realized my intention was never to completely forsake power tools, they simply didn't seem to fit into my current space. However, the small space has thought me the value of being skilled at using hand tools. I fully subscribe to the type of woodworking where you use machines to do the heavy lifting of milling your wood to size, and hand tools to finish the joinery and surfaces.

Like always, the lack of posts does not reflect a lack of work. Quite the contrary. The shop has progressed quite a bit since that last post. It has gotten much more "cozy". I've been able to jam enough tools into this little room to make just about anything, and if I can do it it such a small space I hope to inspire others to do so as well.

I hope to have some new posts soon with some actual working content. Stay tuned. But for now, welcome back!