The next step on my nephew's bench is to cut the mortises for the stretchers on all the legs. I lay out all the mortises on the legs. It's nice to have several combination squares, this way you can set several different dimensions and make your layout go quicker.

I bored out the majority of the waste with a forstner bit in my drill press. Then clean up with a chisel. 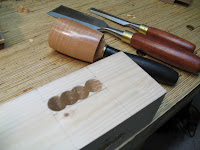 The Stretchers are single 2x4's. I just mill them square and cut the tenon cheeks on the band saw and finish the shoulders with my carcass saw. I then dry fitted all the stretcher tenons into their mortises. Once they slid into place I prepared them for draw boring. I won't go into too much detail here, but draw boring is an amazingly simple way of securing a mortise and tenon joint to be virtually indestructible. You don't even really need glue to hold them together.

I debated whether I should build a vice for the bench. I knew it would take more time than I had, but I just couldn't help but think how cool it would be for my nephew to have a real working leg vise to hold things with. I ended up deciding to prepare the bench for the addition of a leg vice at a later date. Possibly for my nephew's 4th Birthday. 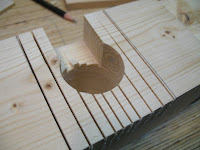 I cut the paralell board mortise the same way as the leg mortises. Instead of cutting a square mortise for the screw like Chris Schwarz did, I just bored an oversized hole. I will be making a maple threaded "nut" that will be let into the back of the leg. Here you can see how I made several kerfs using the band saw which I could easily split out and pare down with a chisel. 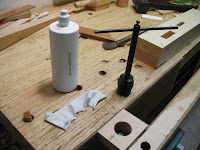 I bored and tapped the nut then glued it in place. I'm using a 1-1/2" screw box that I had bought for building my Moxon twin screw vice. It turns out to be the perfect size for a vice screw on a mini Roubo. 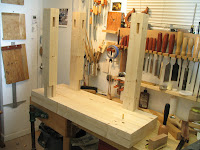 The next step was to join the legs to the top. This involves a very cool double mortise/dovetail joint. I started by arranging the legs onto the top and marking the locations for the joints. Since this is all done by hand and there are inevitably slight variations between each leg, I make sure that each leg is numbered to it's location. 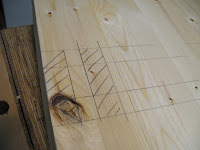 Of course one of the legs had to land on this mess. Luckily when I went to cut the dovetail mortise at this location the knot stayed intact after cutting through it and it didn't cause any problems. 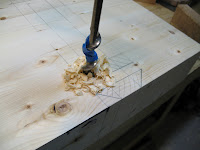 The mortises in the top were more of the same drilling out the majority of the waste and chiseling. The difference this time is that the top was too massive to drill on the drill press. I switched to a hand operated bit and brace. I've found that you can bore the holes just as fast this way when compared to boring them with a cordless drill with a forstner bit. The amount of torque you can create with the bit and brace is much greater and more easily controlled than that of a cordless drill. Oh, and you don't need to recharge your battery halfway through. But it is quite a workout on the arms! 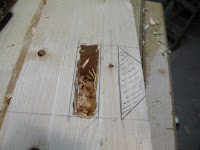 The rest of the project was a mad dash so I don't have any more pictures of the process. I was somewhat surprised at how little futzing I had to do to get all the joints to go together for the dry fit. All my sawing, paring, etc must be getting more accurate from all my practice. However, if your joints are tight without glue, you might want to make them a little less tight. With the addition of glue the wood tends to swell a bit. I ended up having to really wail hard on the legs to get them to seat all the way. I'm not sure what my neighbors thought of the 15 minutes of louder than usual banging... on Christmas Eve morning.

Yeah I cut this one pretty close. I was also: shellacking my sister's side table, pinning the mortises on my uncle's picture frame, and sawing out the letters of my nieces name on the band saw. It was a busy morning. I'll show some of those projects later.

It then sat in the back of my truck under a tarp until my nephew opened all of his many, many, many gifts. Then finally I brought it in, he really seems to like it!

I'll try to get a better overall picture of the bench. I just didn't get a chance with all the holiday madness.

Wonderful mini Roubo bench !!!!…
I don't see any flaw in its building either on the pictures or the text.
It's only the little guy at the end of the project that tells what the real scale is !…

But you made one VERY bad mistake (strong adult voice here) : there is not such thing as a "petite" Roubo. A workbench being masculine you should spell it "petit Roubo".
But you're forgiven !!!… LOL
Myself not being so keen with the French fad in the U.S. (nor am I with the American fad in France !…) I really don't see how I could be offended … except for having the opportunity to send you a a nice message.
Again, thank you for posting and tell your nephew there is an older guy over here who expects to see his projects on the net (or there !).
Cheers.
Vincent


Asking questions are genuinely fastidious thing if you are not understanding something completely, but this piece of writing offers nice understanding even. all of craigslist